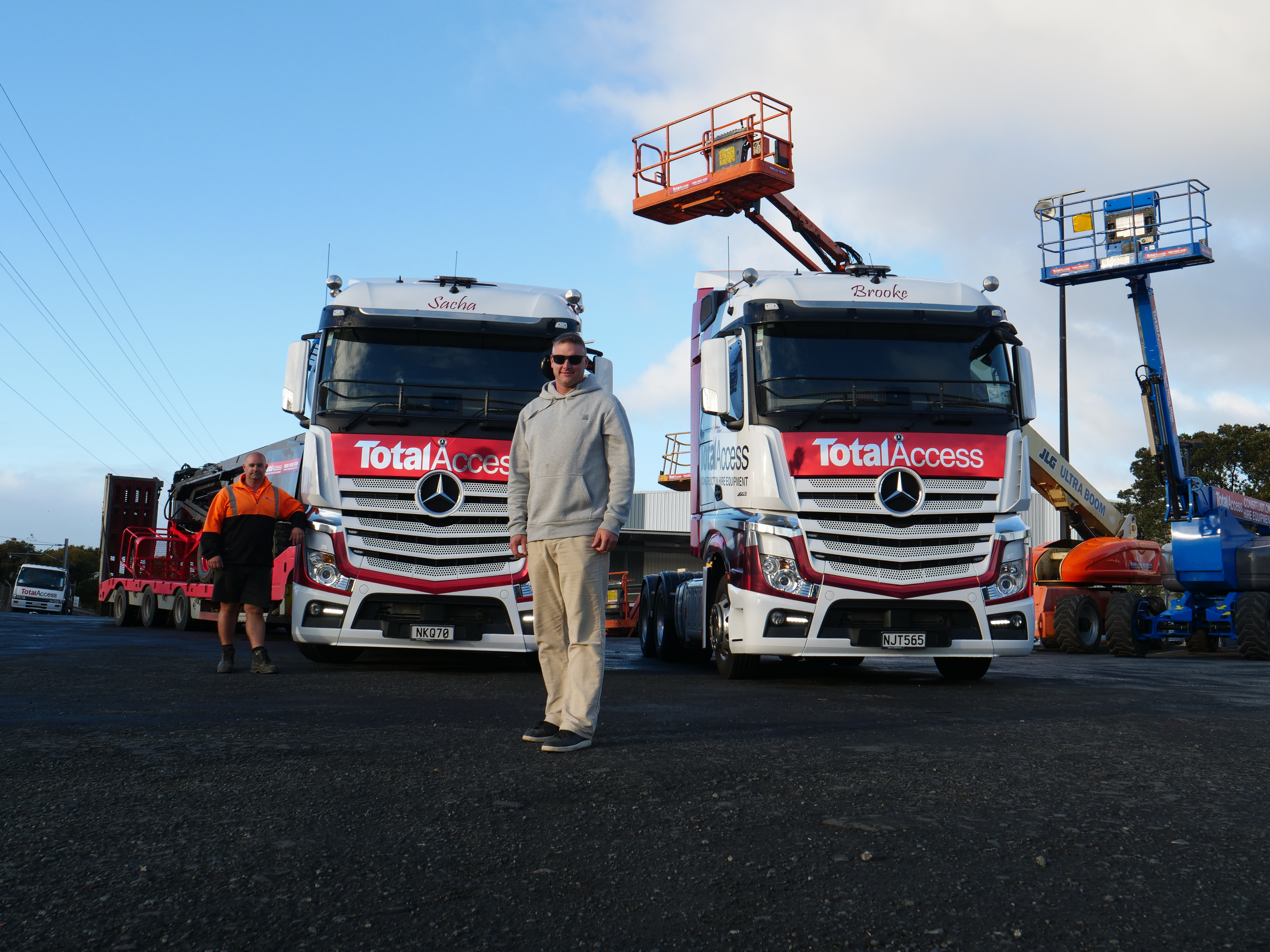 RAISING THE GAME WITH ACTROS

When it comes to getting high safely, not many do it better than Total Access Solutions. Owner-director Shannon Chambers has always invested in quality gear – and that extends to the trucks he uses, recently adding two new 630hp Actros tractor units to his fleet.

Originally a builder, Shannon once priced a job incorrectly and it changed the course of his life.

“It was back in 2004 and I realised I’d missed access equipment off the quote,” he recalls. “I discovered that hiring it would send me broke, so I bought my own. Then I ended up hiring out it to other contractors onsite.”

The new Actros tractors haul up to 22 tonnes on 3-axle or 4-axle low-loader trailers and are mainly used to shift heavy gear, such as the massive 56.86m Genie SX-180 telescopic boom platform.

With a background on the tools, not in a cab, Shannon leaned on the experience and expertise of Keith Andrews when the time came to upgrade his fleet.

“I’m not a truckie,” admits Shannon. “We just use them to deliver stuff every day. I’ve bought trucks almost solely from Keith Andrews since we started the business. The relationship with them led me to the Mercedes-Benz.”

The trucks predominantly operate in the Auckland, Hamilton, Tauranga ‘Golden Triangle’ but also move gear to Wellington and the South Island. Power matters to Shannon, which is why his two new Actros units are equipped with 15.6L OM473 in-line six-cylinder Euro 6 engines with 630hp and 3,000Nm.

“There’s nothing worse than not having enough power,” he says. “Some of our other trucks are a bit short and you’ve got to ride them pretty hard. I would have taken more power if I could get it. It’s just so much easier on the truck and the driver. These will do about 15 years in our fleet and about 600,000-700,000km over that time.”

Shannon didn’t just go big on power, he was also impressed by the silky G330 12-speed PowerShift 3 automated transmission – as is the man at the wheel, driver Tony Frazer.

“It’s very smooth. You’re up to speed before you know it,” says Tony. “You look down and you’re in 10th or 11th gear and you don’t really feel it.

“Even with our heaviest machine on, the Actros goes easy. I’m about 20 minutes quicker on a run through to Wellington.”

Tony says the user-friendly Adaptive Cruise Control reduces fatigue on those long trips. “It’s so much easier. You can sit back and just steer. If you tap the brake just a little, the truck pulls back and keeps it in cruise control.

“The cab is also nice and high and has good visibility through the whole windscreen, it’s really comfortable, and very easy to drive.”

At 2.5m wide and with nearly 2m of headroom, the spacious StreamSpace L-cab offers a high level of comfort, while providing excellent fuel efficiency due to its low-drag design.

From the outside, these trucks look the part as well – a credit to Shannon’s imagination and the skill of Judy Rogers, his in-house signwriter.

“I wanted the cab design to look like a Transformer. Mercedes trucks have got the look and Judy’s graphics aced it first time,” he says.

With a vision to look and be the best in the business, backed by top-of-the-range trucks and solid support from Keith Andrews, it seems like pricing that building job wrong back in the day was a mistake that really added up in the long run!