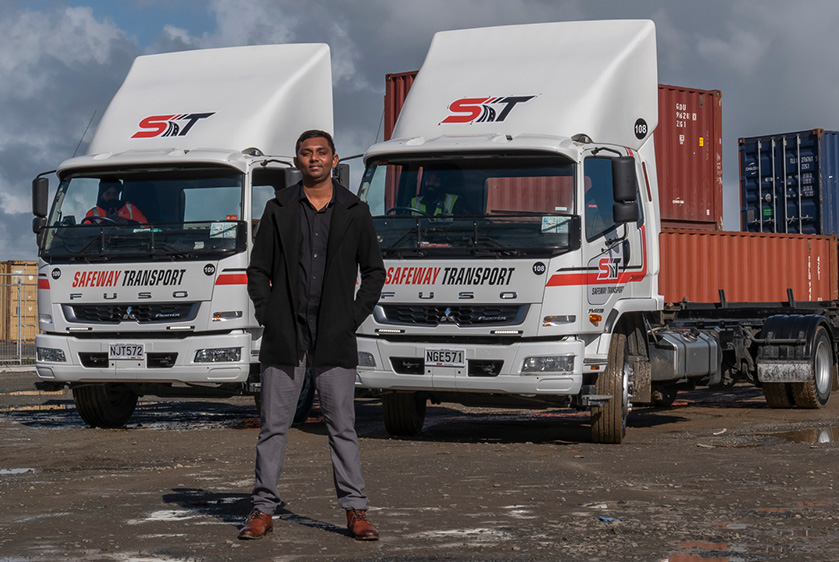 Safeway Transport started running empty containers in October 2020 and quickly established itself as an industry disrupter, building a fleet of 12 trucks in almost half as many months.

The charismatic owner of Safeway Transport, Monish Prasad, doesn’t do anything at half-speed. It took him less than a year to establish a business in a sector notorious for its high barrier to entry, and he did it with virtually no experience.

It was nearly so different. If things had worked out the way he planned, Monish wouldn’t have been anywhere near the trucking industry. He was training to be a paramedic, while running an import/export business in his spare time; however, student debts forced him to become a full-time owner-driver for a courier firm.

That role led Monish to Green Gorilla – which provides waste and recycling services in Auckland – as an owner-driver. His next step, 18 months later, was to become an owner-driver within an existing business in the container game.

“I bought a container truck with the income I earned from Green Gorilla,” says Monish. “I just wanted to try something in that field, but it didn’t work out.”

Not one to be blown off course by a minor setback, Monish embraced the experience. It taught him the ropes, introduced him to important contacts, and provided a springboard into the industry.

Before Safeway Transport could get off the ground, there was a small problem to overcome. Monish needed more trucks, because he couldn’t get business contracts with less than five in his fleet.

There’s a reason why there’s only a small number of empty container businesses in Auckland. This isn’t an industry that has been kind to new players – except no new player has been as determined as Monish.

He scraped together enough for some deposits and managed to secure his first five trucks, three second-hand and two new, in a mix of brands.

But Monish’s heart was always set on a FUSO Fighter, a reliable medium-duty truck he knew from his days driving one for Green Gorilla. It wasn’t until he had assembled 10 vehicles in his fleet that he was able to realise that ambition.

He turned to Keith Andrews and salesperson Mike Orr – the start of a “brilliant” relationship that was key to getting the deal over the line. Mike also arranged headlight covers, a roof kit, stone guards and side deflectors.

“My aftersales care so far has been excellent,” says Monish. “FUSO’s extended five-year / 500,000km warranty was also a key factor compared to other brands, which had a 200,000km warranty. It just gives me greater peace of mind.”

The two 4x2 Fighter FM1628 medium wheelbase units went from Keith Andrews to Ideal Services to become 40/20 units, with an extended chassis and simple trailer connected via a stinger set-up.

“The bodybuilder said the Fighter chassis was one of the strongest he’s ever seen!” says Monish.

The pair have clocked 75,000km each in three months, running 24/7 between Auckland, Tauranga and Hamilton.

“We do a lot of kilometres and haven’t had any issues,” says Monish. “They’re really good trucks. I find them comfortable – FUSO changed the seats to Isringhausen and that’s a good feature. The Bluetooth and CarPlay/Android Auto is also really good, and the simple stuff just works as you’d want it to.”

It’s not just the simple stuff that’s working well for Monish right now. The man with a very big plan has found that determination, a can-do attitude and the support of key relationships are all contributing to his current success.

Speak to your local FUSO dealer to find the right medium-duty Fighter for your business.

Reliable, cost-effective and proven over 25 years in NZ, with 23 model types across the range, Fighter trucks fit the bill for tipper, flat deck, curtainsider and box body applications, as well as other specialist roles such as skip trucks and waste trucks.