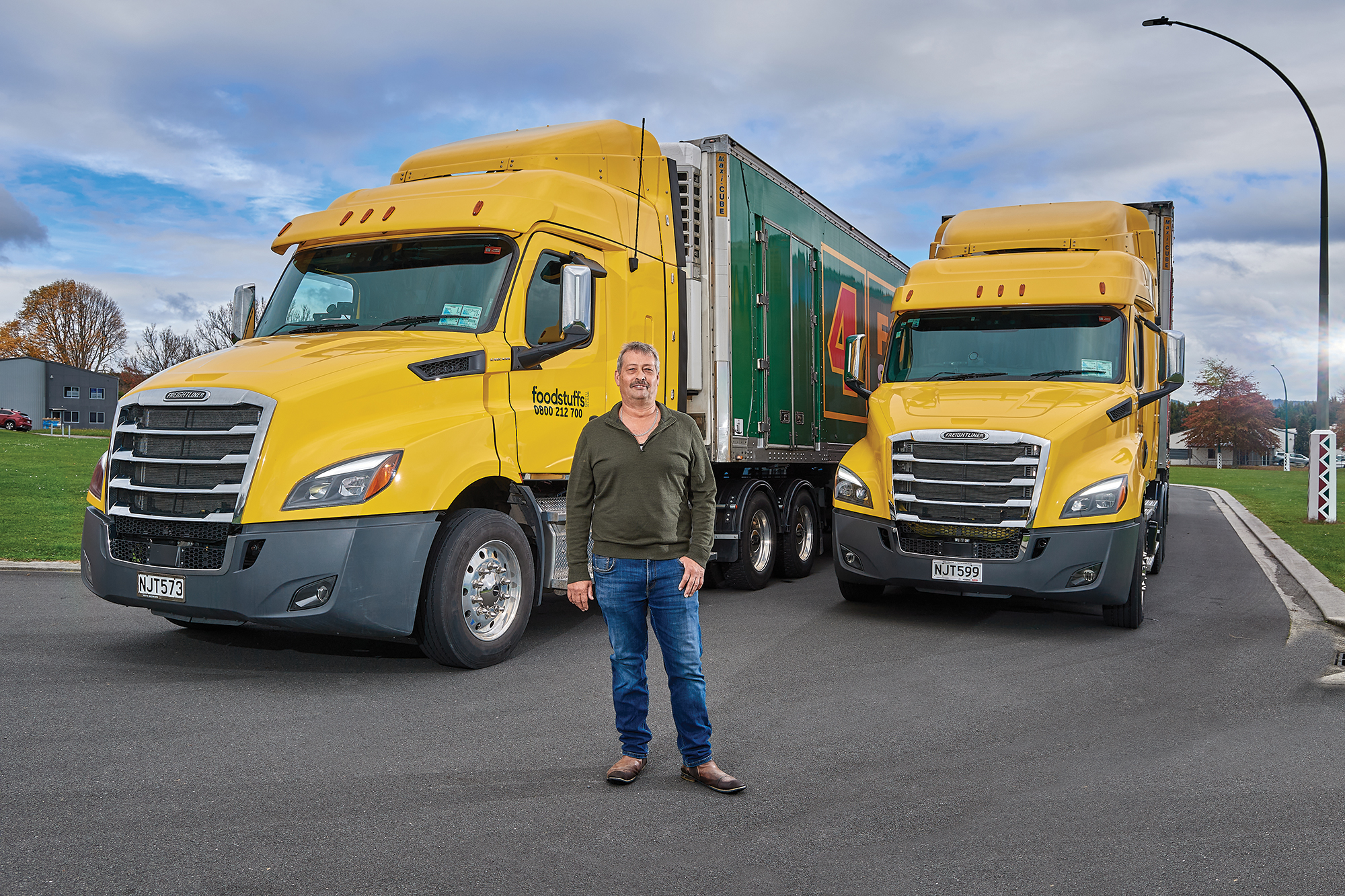 NO SLIP-UPS WITH CASCADIA

Blue Ice Logistics owner-director Paul Stone tried something different when he ordered two brand-new Cascadias, and he’s not looking back.

After test-driving the new Freightliner Cascadia over in Australia, Blue Ice Logistics owner-director Paul Stone decided to break with tradition and get some American muscle in his fleet.

Paul has been involved with the transport industry his whole working life – in fact, the company that gave him his start is now one of his biggest customers.“I got my licence at 18 through Foodstuffs,” says Paul, who after spending 22 years behind the wheel for various companies, decided it was time to take control of his own destiny.

He initially bought BOP Truck Washing and as the business grew, opportunity came knocking that led to the establishment of Blue Ice Logistics. Paul now has a fleet of 25 trucks – mainly European – with five owner-drivers on board.

Scania and Mercedes-Benz have been the dominant force at Blue Ice, and it could have stayed that way had Paul not had the chance to get over the ditch to test drive the all-new Cascadia.

“I was invited to the launch and drive days in Australia,” explains Paul. “I’m glad I went, because I probably wouldn’t have bought the Cascadia if I hadn’t had the chance to drive one.

“The cab is wide and comfortable, the visibility is better than almost anything in our fleet and it’s quiet but still has plenty of power,” he says.

Paul is running the 505hp DD13 Detroit Deisel engine in his Cascadia, which gives him everything he needs.

“They’re probably a bit overpowered for our requirements, but with the sleeper on them they still have a good second life and some re-sale value,” says Paul.

“Our other trucks are doing 2.2km/L to 2.4km/L. We expect better with Cascadia’s aerodynamics and technology settlings such as ‘Optimised Idle’. I’ve noticed AdBlue consumption is pretty low too, which should mean so is the
fuel burn.”

The business needs trucks that don’t complain when asked to work almost non-stop, pulling 42T either a three axle Freuhauf or a four axel MaxiTrans trailer.

While the Cascadias are very capable units, the after-sales package was the clincher for Paul, especially when some European brands insist on dumping oil at 20,000km. Freightliners by contrast, only dump oil at 80,000km.

“The service contract made the difference. I don’t want my trucks in the workshop all the time because it’s dead money. It’s just crazy, the workshops are already overloaded.”

“We’ve got Lane Departure Protection; we’ve got all of those things. When you’re in a double lane, it makes you more aware that there’s a car right there and it stops you wandering over to that other lane. It’s making the drivers more aware – they have to be. The tech changes them for the better.”

It’s safe, but it also rides incredibly smoothly – which hasn’t always been a key feature of Freightliner trucks.

Cascadia is also easier on the drivers making those semi-metro deliveries. Instead of the four or five steps down that other units have, Blue Ice drivers climb two steps in and out of the cab with ease.

Paul might not have planned to buy Cascadia but once he drove one he couldn’t look past it. Sometimes the best things happen when we least expect.