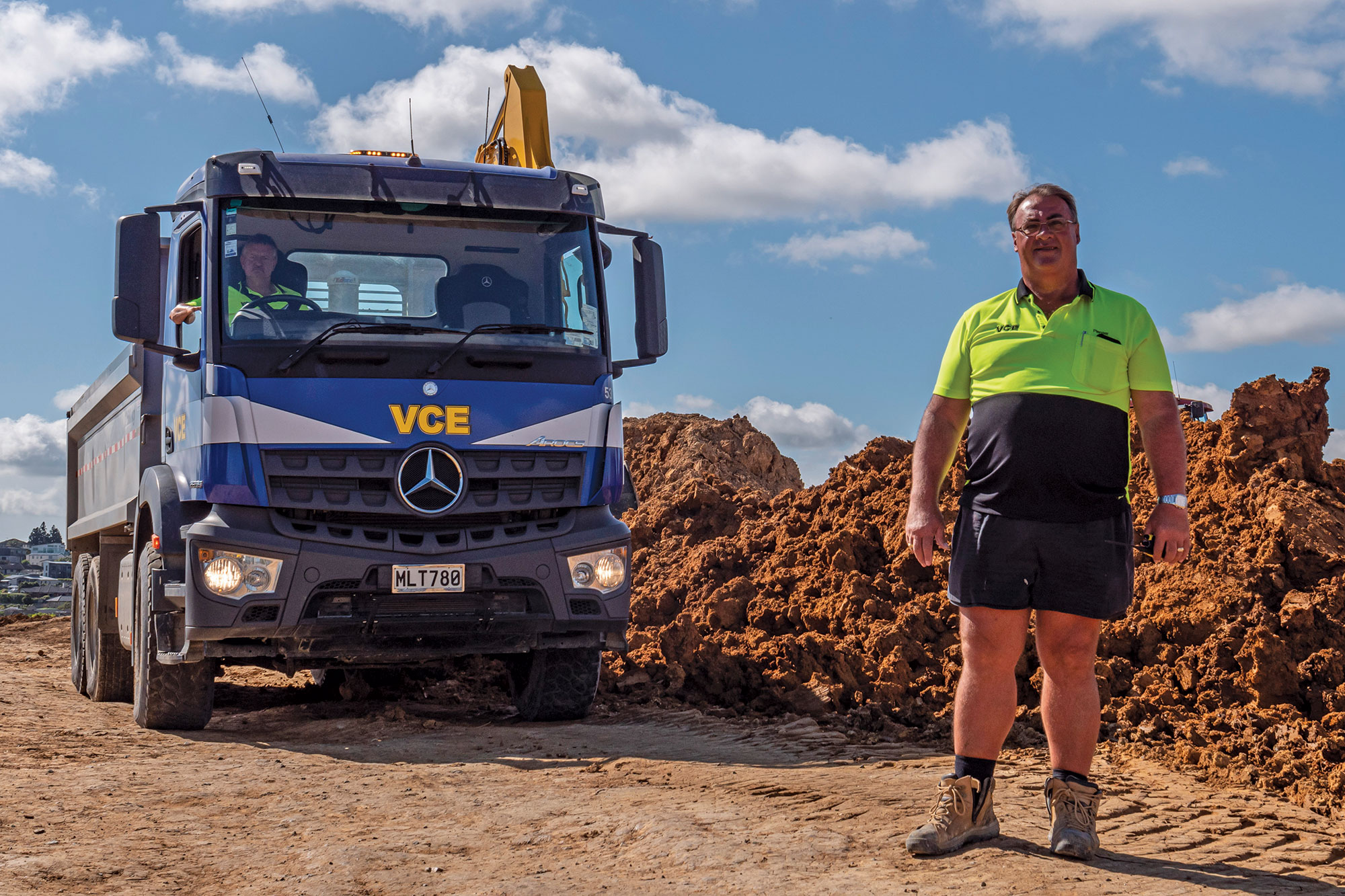 Lay of the land

Anyone who has lived and worked in a different country knows that it takes a while to learn the lay of the land.

So, having arrived in New Zealand in 2003, South African-born Pienaar Piso took time to get to grips with his new environment . Seventeen years later, his Vision Complete Earthworks (VCE) team of 30 – which includes his two sons – operates more than 60 pieces of machinery, including a fleet of 21 Mercedes-Benz Axor, Arocs and Actros trucks.

“I came from earthmoving in South Africa,” says Pienaar, whose roles include company director and digger driver. “But I knew I couldn’t just turn up in New Zealand and successfully start a business – there was a lot to learn about how things were done here and it took four or five years before I bought my first truck and we got going.”

Something that Pienaar didn’t have to learn was a high regard for Mercedes-Benz trucks, which in South Africa, he says, “are the most popular for two reasons: they are very reliable and they are cheap to maintain”.

“They might cost a bit more up front, but over their life that evens out – they just don’t wear out as quickly.”

Having built the VCE fleet up with second-hand trucks, in 2019 Pienaar added two new Arocs 2635K units to the fleet. Both have now clocked 65,000km and Pienaar couldn’t be happier.

“The Arocs, and the Axor before it, are designed for off-road operation. They have excellent front and rear clearance, and cross locks and diff locks, which means they are very good on jobs that are a bit wet and slippery.”

Another thing about these new trucks, which is great for everyone, is the PowerShift 3 transmission – effortless for drivers and easy on maintenance costs, because it all but eliminates wear and tear from gear changes.

“The drivers love the transmission,” says Pienaar. “It’s almost like Tiptronic, you push the lever forward to change up and back to change down, if it needs to it will drop two gears – it’s that smart. It also won’t let the driver make a gear change error. You can’t be rough with it; it won’t let you.”

Pienaar now has another two new Arocs 2646 tippers on order, which will feature Mercedes-Benz MirrorCam technology, a feature he says will instantly add value beyond the fuel-saving potential it is designed for.

“Access to many sections around New Zealand is getting tighter and we are finding more and more sites where our trucks don’t fit, just because of the mirrors. No mirrors will make a big difference purely from a practical point of view.”

Pienaar says that since its establishment in 2007 the company has gone from strength to strength, all the while building on its Mercedes-Benz fleet.

Based in Te Rapa, Hamilton, VCE is committed to providing high-quality services – “on time, on budget, at a high level of safety” – to the civil construction industry throughout the Waikato and surrounding region. Pienaar’s team has completed more than 12,000 projects since the company was started in 2007. VCE has since expanded to meet a wide range of needs in the construction industry, including sewer services, storm line construction and repairs, roading, subdivisions, excavation and earth moving, and much more.

“It was tough to break into the New Zealand market,” says Pienaar. “People here are very loyal. We made a name for ourselves doing the jobs others don’t want to do to a high standard and for a fair price. I don’t have any desire to be the biggest contractor in town, but I do want to be the best.”

To achieve that goal, it helps to have the best tools for the job, which is why Pienaar has stuck with Mercedes-Benz.

“My father told me, if you ever buy something in life, make sure it’s something that others will want. That way, if you get into trouble, it will have good second-hand value. With its proven quality and reliability, it was a no-brainer to build my business on the Mercedes-Benz brand.”