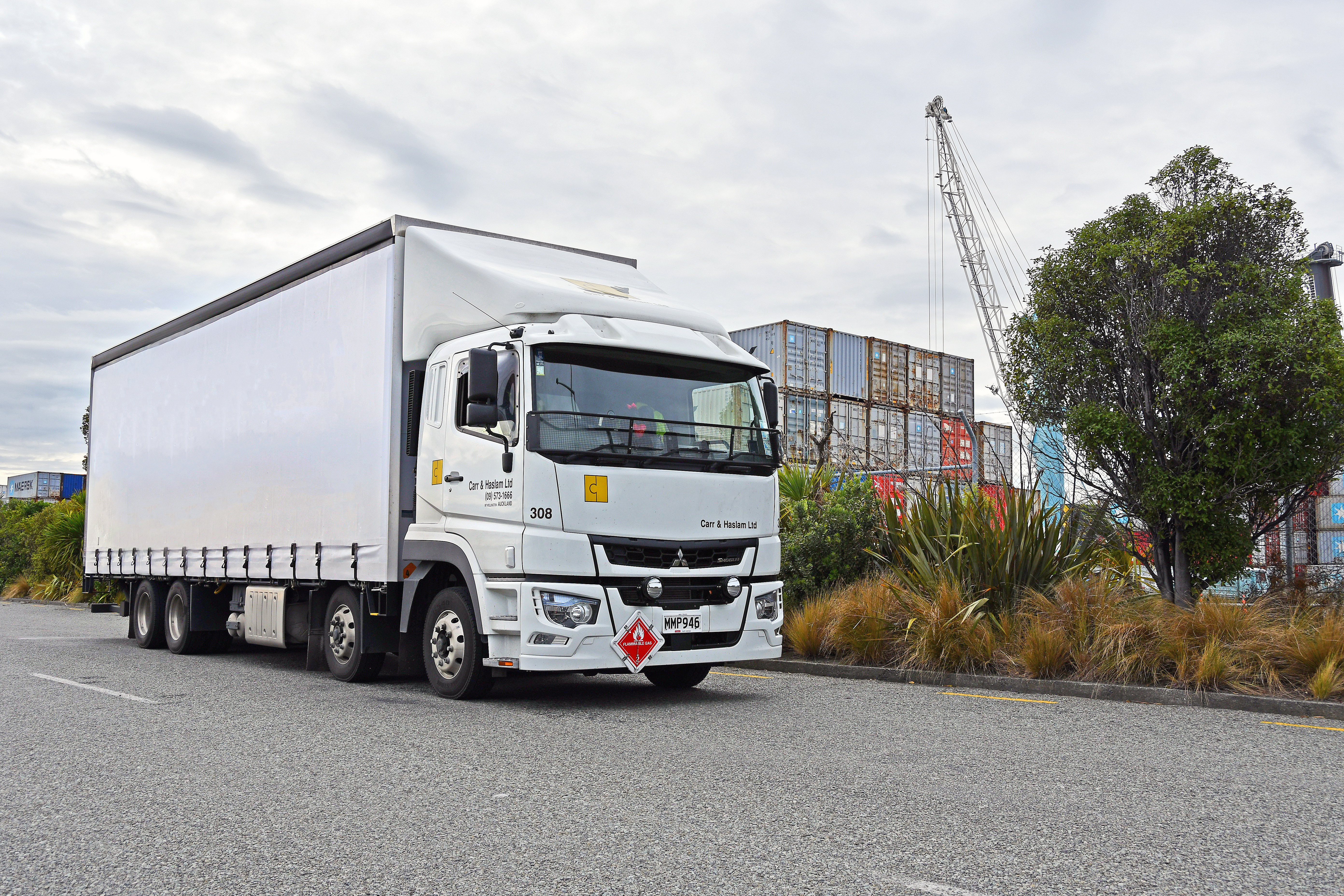 For Carr & Haslam, Shogun’s claim to be a lifesaver has been proven on the job, thanks to its class-leading advanced safety technology.

The FUSO Shogun is the most advanced Japanese truck available in New Zealand. Its OM470 Detroit derived power plant and intuitive Shiftpilot transmission reduce fuel consumption and deliver Euro 6 emissions, while its interior cab comfort needs to be driven to be appreciated.

However, when it comes to technology advances, Carr and Haslam’s Chris Carr knows first-hand that the most significant value lies in Shogun’s lifesaving safety features.

His confidence stems from an incident that happened to one of his drivers, who was transporting bulk dangerous goods east along the southern end of Lake Taupo in a Shogun FV2546.

“As the driver ascended the hill on his way toward the Tokaanu Lookout, just out of Waihi, a car travelling west down the hill either misjudged the corner or its entry into a rest area on the northern side of the road,” says Chris. “As it sped across in front of the truck, the autonomous emergency braking activated, bringing the 25T Shogun to an almost instant stop. In doing so, the car’s driver narrowly missed a very serious, if not a deadly, crash.

The driver, who didn’t even see the car coming, said the truck was only travelling about 50km/h and the car came out of his blind spot – there was nothing he could have done. Without the truck intervening, he was certain he would have hit the side of the car and that it would have been a pretty destructive collision.

“Additionally, in this situation, our vehicle was carrying dangerous goods, which could have added another layer of complexity and volatility to the situation,” says Chris.

“In my experience, neither cars nor their occupants come off very well in car verses truck collisions, and even if they avoid physical injury, truck drivers often struggle with the ongoing psychological trauma following a crash and often leave the industry

“In my view, as a transport company operator, we need to be doing everything we can to keep our guys and girls safe on the road and in the industry. I can understand the resistance to some of the additional cost of these technology advancements; however, it’s situations like these that change the course of people’s lives.”

Chris also believes that the government should come onboard and provide some form of incentive or offset to speed the uptake of both safety and emissions technology.

“New Zealand’s best-selling truck brand still doesn’t meet Euro 6 emission standards, or have advanced safety features in any of its models, where most others do, but other than a moral consideration, why else would an operator spend more? I think it’s something that we also need to address as an industry.

“At the end of the day, if, as a sector, we don’t keep moving forward and investing in both technology and the personnel to use it, in 15-20 years we’re going to end up with a serious shortage of quality people, quality equipment and quality delivery processes.”